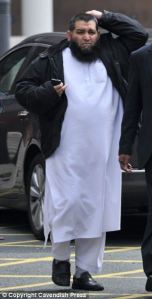 Suleman Maknojioa, a hafiz and a teacher of Quran, was convicted in the UK of sexually abusing one of his students, an 11 year old girl [Full Article]. His sentence was suspended since he is the only provider of his own six children and wife. I can only hope that this is so his full punishment will be awaiting him in the hereafter.

And yet, my newsfeed is full of “Alice in Arabia” outrage. [ See Time Article Here ] This article states  how:

“American Muslims have lost control of their narratives both online and in the media. While violent Islamic extremists have grown increasingly adept at using social media to craft their messages – as have anti-Muslim activists – more normative voices from Muslims have been drowned out.”

Maknojioa is one of the worst examples of our faith out there right now (whether we want him to be or not). He has perverted our way of life and destroyed the sanctity of the relationship between a teacher of Gods words and the innocence of a child.

Sexual abuse is real. Child abuse is real. Its happening. Don’t wait until it has crept into your own life or the lives of your children before you decide to speak out or at least acknowledge its existence in our communities.